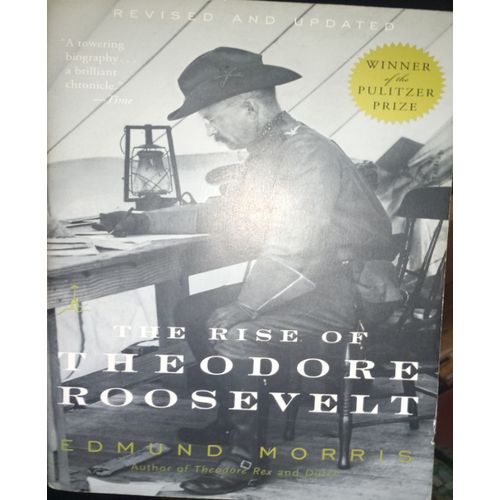 The Rise Of Theodore Roosevelt

The Rise of Theodore Roosevelt begins at the apex of his international prestige. That was on New Year’s Day, 1907, when TR, who had just won the Nobel Peace Prize, threw open the doors of the White House to the American people and shook 8,150 hands. One visitor remarked afterward, “You go to the White House, you shake hands with Roosevelt and hear him talk—and then you go home to wring the personality out of your clothes.”
The rest of this book tells the story of TR’s irresistible rise to power. During the years 1858–1901, Theodore Roosevelt transformed himself from a frail, asthmatic boy into a full-blooded man. Fresh out of Harvard, he simultaneously published a distinguished work of naval history and became the fist-swinging leader of a Republican insurgency in the New York State Assembly. He chased thieves across the Badlands of North Dakota with a copy of Anna Karenina in one hand and a Winchester rifle in the other. Married to his childhood sweetheart in 1886, he became the country squire of Sagamore Hill on Long Island, a flamboyant civil service reformer in Washington, D.C., and a night-stalking police commissioner in New York City. As assistant secretary of the navy, he almost single-handedly brought about the Spanish-American War. After leading “Roosevelt’s Rough Riders” in the famous charge up San Juan Hill, Cuba, he returned home a military hero, and was rewarded with the governorship of New York. In what he called his “spare hours” he fathered six children and wrote fourteen books. By 1901, the man Senator Mark Hanna called “that damned cowboy” was vice president. Seven months later, an assassin’s bullet gave TR the national leadership he had always craved.

“Magnificent . . . one of those rare works that is both definitive for the period it covers and fascinating to read for sheer entertainment.” —The New York Times Book Review   “Theodore Roosevelt, in this meticulously researched and beautifully written biography, has a claim on being the most interesting man ever to be President of this country.” —Los Angeles Times Book Review   “Spectacles glittering, teeth and temper flashing, high-pitched voice rasping and crackling, Roosevelt surges out of these pages with the force of a physical presence.” —The Atlantic Monthly

The Rise Of Theodore Roosevelt

₦ 7,500
Questions about this product?