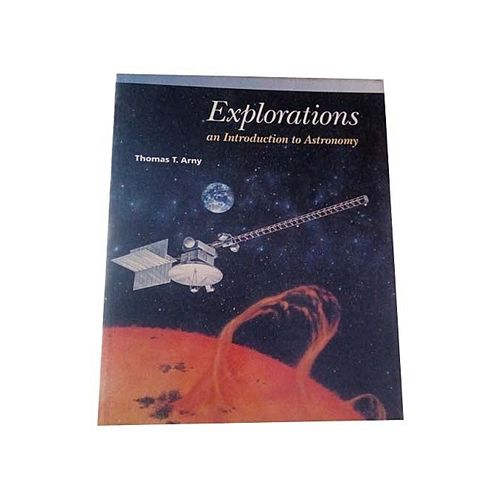 Click here to list your product
Explorations: An Introduction to Astronomy by Thomas T. Arny share with students and astronomy lovers a sense of wonder about the universe and the dynamic, ever-changing science of astronomy. Suitable for students of various educational backgrounds, this title emphasizes information, a visually exciting art package, accessible writing, and accuracy. Astronomy is a natural science that studies celestial objects and phenomena. It applies mathematics, physics, and chemistry, in an effort to explain the origin of those objects and phenomena and their evolution. Astronomy is the study of the sun, moon, stars, planets, comets, gas, galaxies, gas, dust and other non-Earthly bodies and phenomena. More generally, all phenomena that originate outside Earth's atmosphere are within the purview of astronomy. Astronomy is one of the oldest of the natural sciences. The early civilizations in recorded history, such as the Babylonians, Greeks, Indians, Egyptians, Nubians, Iranians, Chinese, Maya, and many ancient indigenous peoples of the Americas performed methodical observations of the night sky. This book provides a detailed introduction to astronomy.

A good book for beginners.