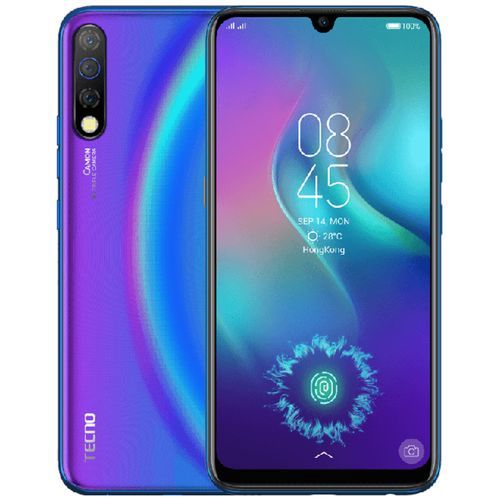 Click here to list your product
The Tecno Camon 12 Pro is a refresh of the Camon 11 Pro. Tecno is following up with tradition by not only launching a standard version of the Camon 12, but bringing a Pro unit to the market for those who want more from their units too. Of course, this will build on what the standard version has and bring even more impressive specs to the market.

With a 6.4-inch screen on the front, there is very little build difference between the Tecno Camon 12 Pro and its smaller brother. However, the display type has been upgraded from IPS to AMOLED.

A switch to AMOLED means great contrast. As a matter of fact, the Tecno Camon 12 Pro boasts 100000:1 contrast ratio.

The Android phone also has the notch on the screen, though this time the design has a U shape as against V shape. The cutout houses the selfie camera and a speakerphone too – but it is slightly more impressive in the screen to body ratio that it promises (91%).

Likewise, we love the fact that the fingerprint sensor of this one was moved under the display, which makes for a more premium feel than the basic Camon 12.

The physical buttons on the outside of the Tecno Camon 12 Pro consist of a volume rocker set as well as the power button, and no more. Tecno is not going to ditch the headphone jack soon, so we have it for one more year on this unit.

Slowly, we move to the back where some magic happens.The rear camera arrangement remains a triple setup, and the brand still chose to go the way of plastic, but it is made to look better for this unit.

Finishing off the 20:9 aspect ratio screen and body comes in an impressive Dawn Blue colour finsh.

Again, we do hope Tecno has more colours in the bag and are just waiting to launch them to the market sometimes later.

The only important upgrade in camera between the Camon 12 and Tecno Camon 12 Pro is in the selfie department where the later unit has a 32MP snapper.

This puts it on par with the earlier released Phantom 9, and the same can be said of the rear cameras.

Here, we have a main 16 megapixels snapper which is followed by an 8 megapixels ultrawide sensor and 2 megapixels depth sensor. For those who do not already know, there will be no telephoto lens here, so the phone will be forced to take its portrait shots from any of the other cameras on board.

Tecno Camon 12 Pro shares the same dual flash design of the vanilla Camon 12 and the Phantom 9. The LED flash flanks the earpiece on both sides.

Besides that, these smartphones are identical in how they ship with a quad LED flash setup on the back. You also have AI and AR baked into both cameras.

The MediaTek Helio P22 chipset seems to be the Tecno standard for top devices this year, and we see it again in the Tecno Camon 12 Pro.

This octa core chipset is bundled with an increased 6GB of RAM, but the storage (at 64GB) remains the same as that of the Camon 12.

However, both mobile phones can be ramped up in space with the aid of a dedicated microSD card slot.

The OS of choice is Android 9 Pie which has been adapted to the in-house HiOS 5.5. To round up, the 3500mAh battery is less impressive than the 4000 mAh we saw in the Camon 12. We should have expected that the more premium device will come with the bigger battery, but reverse is the case here.