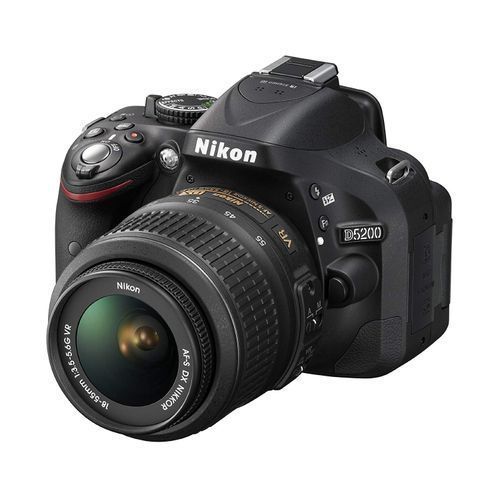 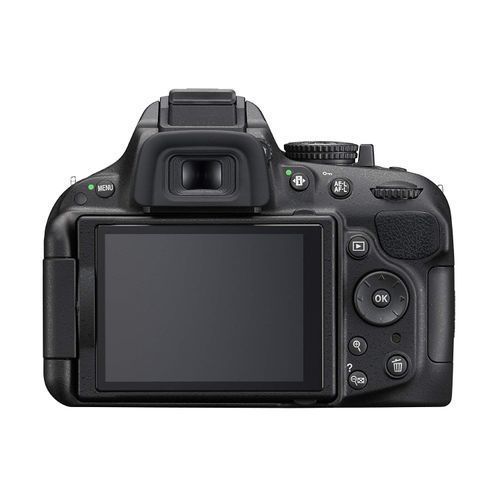 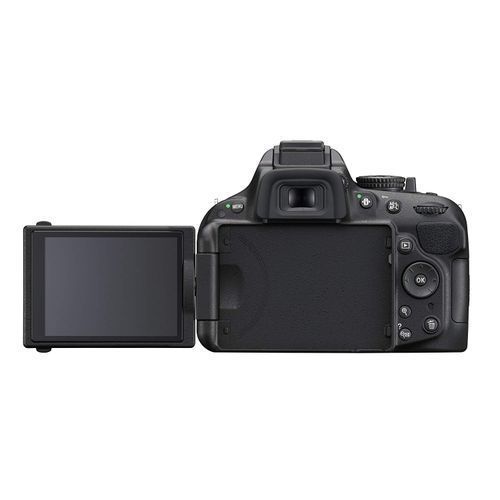 The Nikon D5200 Digital SLR Camera with 18-55mm Lens (Black) is designed to awaken your creative passion. Find exciting new perspectives with an ultra-high resolution Vari-angle display that swivels to nearly any position. Capture your vision in lifelike brilliance with an exceptional 24.1 MP DX-format CMOS sensor, then share it instantly with the optional WU-1a Wireless Adapter. Unleash the artist within.

The Nikon D5200 is an upper entry-level DSLR that improves on the D5100 by offering a 24MP CMOS sensor, 1080i60 movie capability, a side-articulated 921K dot 3.0" tilt/swivel LCD and new processing filters. The D5200 is also equipped with a significantly upgraded AF system, based around the same Multi-Cam 4800DX AF sensor that is used in the D7000, and the same 2016-pixel RGB metering sensor. The D5200 is also compatible with Nikon's optional WU-1b WiFi module.

Overall, the D5200 is a solid performer that, while geared towards beginning DSLR users from an operational standpoint, shares many specifications with more expensive enthusiast offerings. It combines excellent image quality and impressive high ISO performance with an articulated screen and video capabilities that hold appeal for video shooters with a post-production workflow.

The D5200 uses a 24-megapixel sensor, which stands up well today in terms of pixel count. But its best feature is the 39-point autofocus, with a central block of nine cross-type points for increased sensitivity. It's the same autofocus sensor that we first saw in the Nikon D7000, and it's far more sophisticated than anything else at this price. The dense array of points mean it's easy to focus precisely on someone's eye or another small detail in a scene without having to first focus, then recompose and shoot.

It's also a great benefit to the 3D Tracking focus mode. Here, the camera uses its 2,016-pixel metering sensor to track moving subjects around the frame and keep them in focus. More autofocus points mean more accurate tracking. This lets you think about the composition when shooting moving subjects rather than having to follow their every move to ensure that the selected focus point lines up.

There's the same 3in, 921,000-dot articulated screen as on the outgoing Nikon D5100, which is a great asset for video and shooting stills in live view mode. Continuous performance is roughly the same as the newer D3300, delivering 4.9fps for 32 frames before slowing to a still-excellent 4.2fps in our tests. This was only possible when lens distortion correction was disabled, though – otherwise, it lasted for just six frames before slowing to 1.9fps. Raw continuous performance was similarly short-lived, slowing to 1.6fps after just four frames. The D3300 slows to 1.7fps but after six frames, so it's a touch faster here.

Another change compared to the D3200 and D5100 is that the LCD screen's default display makes it much clearer what the current ISO speed is, including when the speed has been raised automatically in Auto ISO mode. With three circular displays for shutter speed, aperture and ISO speed, it's easy to see how adjustments to one affect the other two. The ISO speed isn't displayed through the viewfinder window by default but there's an option to show it instead of remaining card capacity.

Special Effects that enable you to enjoy various creative expressions in still images and movies by setting prior to shoot.High-speed, multifunctional and high-performance image-processing engine "EXPEED 3", equivalent to that of the Nikon's flagship model, D4.Wide sensitivity range of ISO 100 to 6400 (expandable to ISO 25600 equivalent) that delivers sharp images with reduced image blur even in low-lit situations or sports scenes.High-speed continuous shooting at approx. 5 fps that surely captures decisive moments.Stereo microphone employed [NEW], Full HD (1920 x 1080) D-Movie with selectable 60i/50i frame rate.Easy-to-understand and easy-to-operate, new GUI that effectively utilizes graphic processing. [NEW]Large, easy-to-view, approx. 921k-dot, wide viewing angle (170°), 7.5-cm (3-in.) horizontal-opening vari-angle LCD monitor.Energy-saving design that achieves approx. 500 shots* per charge (with EN-EL14, in single-frame mode).*Based on CIPA Standards.Compatible with the WU-1a Wireless Mobile Adapter (optional) that enables transmission of images to smartphone or tablet PC wirelessly.Compatible with the WR-R10/WR-T10 Wireless Remote Controllers (optional). Remote control is ensured even if there are obstacles in the way. [NEW]16 options of Scene Modes that enable selection of the most appropriate mode according to the shooting scene or subject.Variety of image-editing functions that allow you to retouch images easily after shooting, such as NEF (RAW) processing, Trim and fisheye.