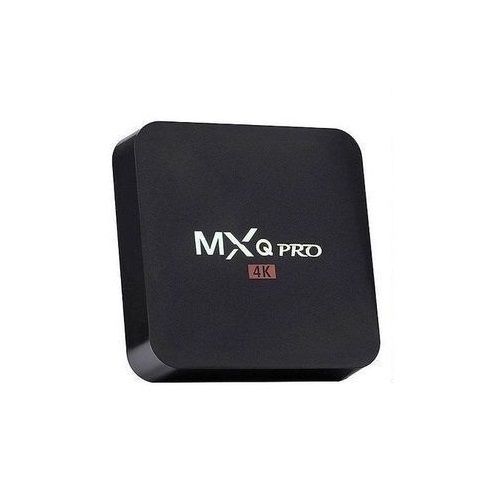 Click here to list your product
MXQ Pro is a smart Streaming Media Player with Android 7.1(2) Lollipop OS, powered by Quad core Amlogic R3229. With preinstalled Google Play Store and other apps, you can enjoy smooth multi-tasking, game playing or movie viewing. You can watch anything and everything on this box. Live EPL matches, Champions League, Europa, FA cup, EFL cup, WWE, Porn, cartoon, local and foreign movies, home movies and so many more. As with most Android TV boxes, the main ingredient is Kodi Media Center and how well that runs.RAM: 1GBROM: 8GBColor: BlackCPU: Quad Core
Things I like about the MXQ Pro 4K Android TV Box Nice power due to the Quad-core 64-bit ARM Cortex-A53 and Penta-core ARM Mali-450 GPUAbility to play 4K videos very well without any bufferingPerfect device for those of us who use Kodi for main applicationWorks great with Rii I8 Mini 2.4Ghz Wireless Touchpad Keyboard With Mouse Would I use the MXQ Pro 4K Android TV Box As A Primary Streaming Device Within My Home?If I was only interested in using Kodi with this Android box, it is an absolute home run. If I was interested in gaming with a Bluetooth gamepad or using Android Apps such as YouTube, I would stick with a streaming device that worked better with a remote such as the Fire TV.