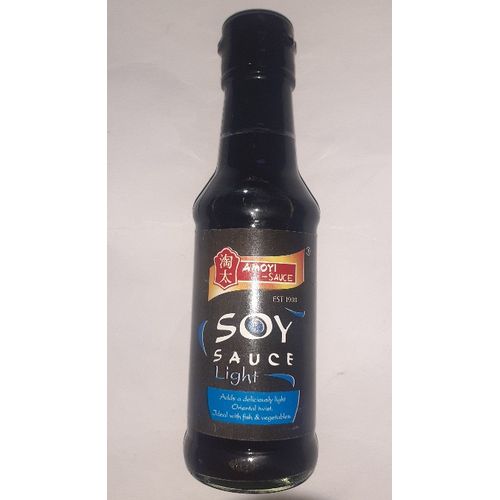 It is thought to have originated from a Chinese product called “chiang” over 3,000 years ago. Similar products were developed in Japan, Korea, Indonesia and across Southeast Asia.

The word “soy” comes from the Japanese word for soy sauce, “shoyu.” In fact, the soybean itself was named from soy sauce (1).

The four basic ingredients in soy sauce are soybeans, wheat, salt and fermenting agents like mold or yeast.

Regional varieties of soy sauce may have varying amounts of these ingredients, resulting in different colors and flavors.
Add Amoy light soy sauce to bring out the intensity of flavours. Brush onto chicken wings or ribs before barbecuing.

Traditional soy sauce is made by soaking soybeans in water and roasting and crushing the wheat. Then the soybeans and wheat are mixed with a culturing mold, most commonly Aspergillus, and left for two to three days to develop.

Next, water and salt are added, and the entire mixture is left in a fermenting tank for five to eight months, though some types may age longer.

During fermentation, enzymes from the mold act on the soy and wheat proteins, gradually breaking them down into amino acids. The starches are converted to simple sugars, then fermented to lactic acid and alcohol.

After the aging process is complete, the mixture is laid out onto cloth and pressed to release the liquid. This liquid is then pasteurized to kill any bacteria. Finally, it’s bottled (3, 4).