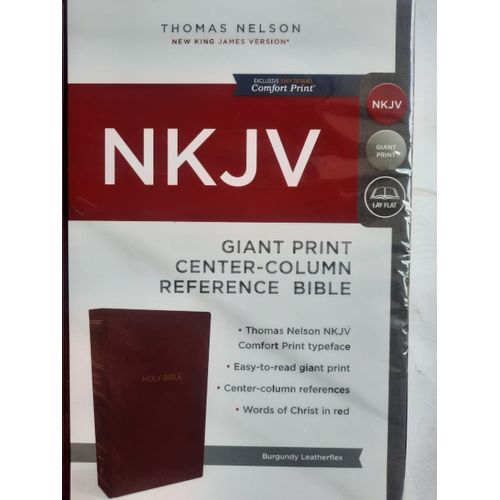 The New King James Version (NKJV) is an English translation of the Bible. The complete NKJV Bible was published in 1982 by Thomas Nelson, now HarperCollins.[4] The NKJV is described by Thomas Nelson as being "scrupulously faithful to the original,[a] yet truly updated to enhance its clarity and readability."[5

The NKJV translation project was conceived by Arthur Farstad. It was inaugurated in 1975 with two meetings (Nashville and Chicago) of 130 biblical scholars, pastors, and theologians. The men who were invited prepared the guidelines for the NKJV.

The aim of its translators was to update the vocabulary and grammar of the King James Version, while preserving the classic style and literary beauty of the original 1769 edition of the King James Version. The 130 translators believed in faithfulness to the original Greek, Aramaic, and Hebrew texts including the Dead Sea Scrolls. Also agreed upon for most New King James Bibles were easier event descriptions, a history of each book, and added dictionary and updated concordance.

According to its preface, the NKJV uses the 1967/1977 Stuttgart edition of the Biblia Hebraica for the Old Testament, with frequent comparisons made to the Ben Hayyim edition of the Mikraot Gedolot published by Bomberg in 1524–25, which was used for the King James Version. Both the Old Testament text of the NKJV and that of the KJV come from the ben Chayyim text. However, the 1967/1977 Stuttgart edition of the Biblia Hebraica used by the NKJV uses an earlier manuscript (the Leningrad Manuscript B19a) than that of the KJV.

The New King James Version also uses the Textus Receptus ("Received Text") for the New Testament, just as the original King James Version had used. As explained in the preface, notes in the center column acknowledge variations from Novum Testamentum Graece (designated NU after Nestle-Aland and United Bible Societies) and the Majority Text (designated M).

The translators have sought to follow the principles of translation used in the original King James Version, which the NKJV revisers call "complete equivalence" in contrast to "dynamic equivalence" used by many contemporary translations. The task of updating the English of the KJV involved significant changes in word order, grammar, vocabulary, and spelling. One of the most significant features of the NKJV was its replacement of early modern second-person pronouns, such as "thou" and "thine"; and corresponding verb forms, such as "speakest"; with their twentieth-century equivalents.

The Executive Editor of the NKJV, Arthur L. Farstad, addressed textual concerns in a book explaining the NKJV translation philosophy.[7] While defending the Majority Text (also called the Byzantine text-type), and claiming that the Textus Receptus is inferior to the Majority Text, he noted (p. 114) that the NKJV references significant discrepancies among text types in its marginal notes: "None of the three [textual] traditions on every page of the New Testament ... is labeled 'best' or 'most reliable.' The reader is permitted to make up his or her own mind about the correct reading."[7]