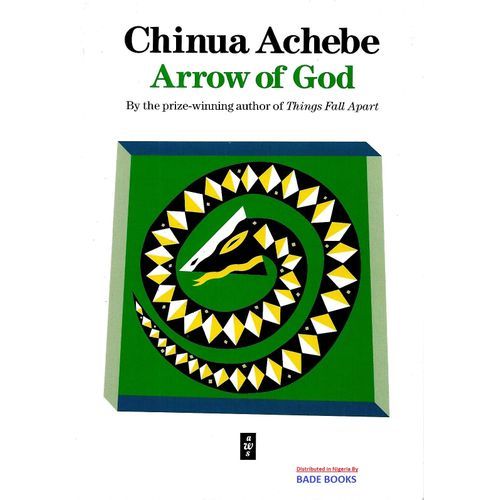 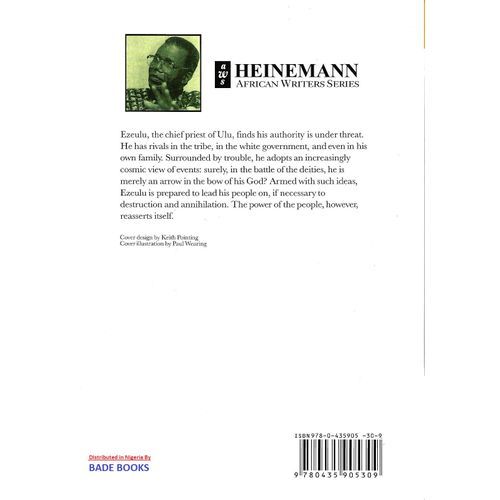 Ezeulu, the chief priest of Ulu, has rivals in the tribe, in the white government and even in his own family. Surrounded by trouble, he adopts an increasingly cosmic view of events - surely in the battle of the dieties, he is merely an arrow in the bow of his God?
Arrow of God, published in 1964, is the third novel by Chinua Achebe. Along with Things Fall Apart and No Longer at Ease, it is considered part of The African Trilogy, sharing similar settings and themes. The novel centers on Ezeulu, the chief priest of several Igbo villages in Colonial Nigeria, who confronts colonial powers and Christian missionaries in the 1920s.[1] The novel was published as part of the influential Heinemann African Writers Series.

The phrase "Arrow of God" is drawn from an Igbo proverb in which a person, or sometimes an event, is said to represent the will of God. Arrow of God won the first ever Jock Campbell/New Statesman Prize for African writing.
The novel is set amongst the villages of the Igbo people in British Nigeria during the 1920s. Ezeulu is the chief priest of the god Ulu, worshipped by the six villages of Umuaro. The book begins with Ezeulu and Umuaro fighting against a nearby village, Okperi. The conflict is abruptly resolved when T.K. Winterbottom, the British colonial overseer, intervenes.

After the conflict, a Christian missionary, John Goodcountry, arrives in Umuaro. Goodcountry begins to tell the villages tales of Nigerians in the Niger Delta who abandoned (and battled) their traditional "bad customs" in favor of Christianity.

Ezeulu is called away from his village by Winterbottom and is invited to become a part of the colonial administration, a policy known as indirect rule. Ezeulu refuses to be a "white man's chief" and is thrown in prison. In Umuaro, the people cannot harvest the yams until Ezeulu has called the New Yam Feast to give thanks to Ulu. When Ezeulu returns from prison, he refuses to call the feast despite being implored by other important men in the village to compromise. Ezeulu reasons to the people and to himself that it is not his will but Ulu's; Ezeulu believes himself to be half spirit and half man. The yams begin to rot in the field, and a famine ensues for which the village blames Ezeulu. Seeing this as an opportunity, John Goodcountry proposes that the village offer thanks to the Christian God instead and they may harvest what remains of their crops with "immunity".

Many of the villagers have already lost their faith in Ezeulu. One of Ezeulu's sons, Obika, dies during a traditional ceremony, and the villagers interpret this as a sign that Ulu has taken sides with them against his priest. For this apparent judgement against Ezeulu and the promised immunity by the Christian God, at the Christian Harvest, taking place a few days after Obika's death, many men embrace Christianity by sending their son there with yams.

The title "Arrow of God" refers to Ezeulu's image of himself as an arrow in the bow of his god.

₦ 2,200
Questions about this product?