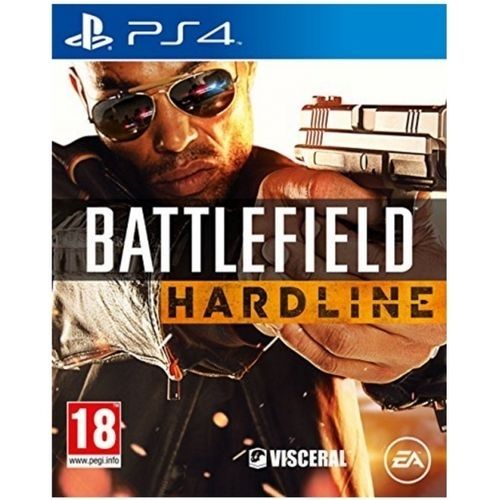 Normally delivered between Thursday 29 Oct and Tuesday 3 Nov. Please check exact dates in the Checkout page.
Live out your cop and criminal fantasy in Battlefield™ Hardline. This action-packed blockbuster combines intense signature multiplayer moments of Battlefield with an emotionally charged story and setting reminiscent of a modern television crime drama. In a visceral single-player campaign you’ll play the role of Nick Mendoza, a young detective who embarks on a cross-country vendetta, seeking revenge against once trusted partners on the force. In multiplayer you’ll hunt criminals, raid vaults, and save hostages in new cop and criminal inspired modes like Heist and Rescue. Welcome to your new playground. Battlefield Hardline PS4 Features: Battlefield Multiplayer— Featuring the strategic team play, variety, and immersion of Battlefield, set in a gritty and glamorous world of cops and criminals. Visceral Singleplayer— From the award-winning studio that brought you Dead Space™, Battlefield Hardline delivers an innovative and dramatic story presented in the style of a modern television crime drama. Downtown Destruction— Shoot out the inside of a subterranean grow-lab, blow open a gleaming bank vault, or blast apart a Los Angeles car dealership. The wide array of urban environments is modern, sexy, and highly destructible. Gadgets and Guns— Play with a full arsenal of military-grade weapons and fictionally inspired gadgets, such as sawed-off shotguns, stun guns, zip lines and grappling hooks. Gadgets can be used anywhere, on every map, making for chaotic and unpredictable combat. Vehicular Mayhem— Fly across the map to reinforce your crew, turn enemies into fresh road kill, or blow past cops on a loot-laden motorcycle. Vehicle gameplay in Battlefield Hardline is fast, fresh and intense.

Not what I ordered for please!!

I hate it with passion. Not what I ordered for. I have returned it back to the pickup station, please help refund my money, so I can't continue to shop on Jumia thanks.