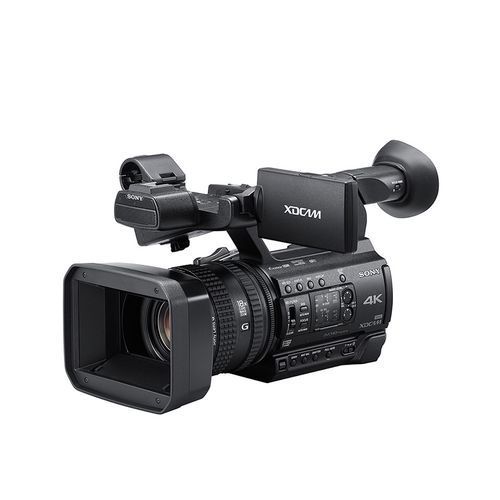 Sony's Slow and Quick Motion for shooting HD video at variable frame rates, including 120 fps. Recording to a variety of formats, frame rates, and codecs, the camcorder supports 100 Mb/s XAVC Long GOP recording of 4K UHD video at up to 29.97p, HD up to 59.94p, MPEG HD up to 59.94p, and AVCHD 2.0 up to 59.94p. Your footage is recorded to media via two SD memory card slots. You can choose to record simultaneously to both cards or use the relay mode which switches recording automatically to the second memory card when the first one is full. It features built-in Wi-Fi and NFC connectivity. The PXW-Z150 features two 3-pin XLR audio inputs that support line, mic, and mic + 48V (phantom power) for using external microphones; you can also use the PXW-Z150's built-in microphone to record audio when shooting. The camcorder also includes Night Shot capability for shooting in extremely dim lighting conditions as well as date/time stamp, and timecode functionality.

1" Exmor RS CMOS SensorThe PXW-Z150 incorporates a 1.0"-type Exmor RS CMOS sensor with approximately 14.2 million effective pixels. The R designation signifies that this is a backside illuminated sensor, and the S designation refers to the buffer design, and that it is able to read the information off the sensor much faster than a non-S designated sensor.Depth of FieldThe 1.0"-type offers more shallow depth of field than 1/2.88"-type or smaller sensors.