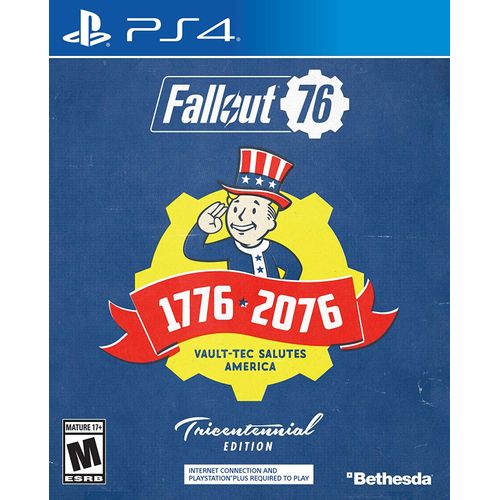 Click here to list your product
Fallout 76 is a multiplayer online game developed by Bethesda Game Studios and published by Bethesda Softworks. It is the newest installment in the Fallout series (ninth overall) and was released on Microsoft Windows, PlayStation 4, and Xbox One on November 14th, 2018. The game is set in Appalachia, comprised of the former state of West Virginia, in the year of 2102, 25 years after the Great War and before any previous Fallout game. It involves Vault 76, which is one of the 17 control vaults designed without an experiment; physical, psychological or social. The player character, the Resident, one of the best and brightest of America, emerges from Vault 76 following a celebration of Reclamation Day, having been sent on a quest to rebuild Appalachia by their vault overseer, who left the vault before the rest of the residents. The player character is given the task of tracking down the Overseer, following her footsteps and holotapes as she travels Appalachia and discovers how the War has changed her former home. In the process, the player character will become familiar with different pre- and post-War factions such as the Responders, Brotherhood of Steel, raiders and the Enclave, and how they coped with the disaster. They will also learn about the Scorched Plague and the emergence of scorchbeasts and fulfill the Overseer's desire to secure one of the missile silos in the region in order to launch a nuclear weapon which will prevent the plague from spreading beyond the boundaries of Appalachia.
According to Todd Howard, the map is four times the size of Fallout 4. It utilizes an open-world environment. The game is entirely online but solo play is possible, via avoidance of other players. The game changes the way the story is presented; removing interactive human NPCs and replacing their dialogue with holotape recordings and notes. Fallout 76 has more holotapes and notes than all previously released Fallout games added together. There are robots and other creatures with personalities that can give out quests and engage in bartering. Player characters are voiceless and engage in very limited dialogue.Almost all other characters met by a player are those of other players.In addition, one player can have multiple characters under the same account.
The game has been labeled as a "softcore survival game." Death does not result in loss of progression, and food and water may also be needed to survive. Loot from containers is instanced, and are unique to players regardless of whether or not another player had previously searched the container.