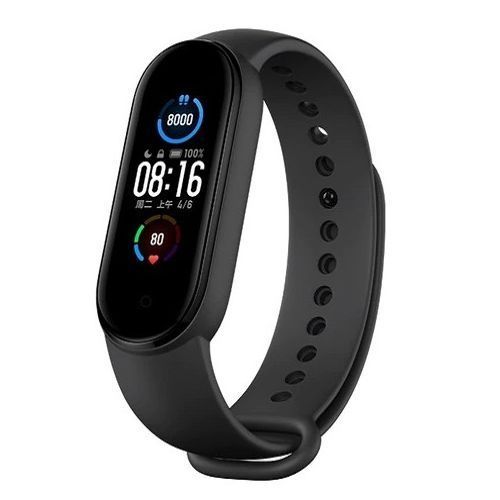 VERY IMPORTANT: This is the Chinese Version but when you sync with the MiFit App on your phone(either from Google PlayStore or Apple's App Store the language changes automatically to the English language if that is the language of your phone.

Xiaomi Mi Band 5 still maintains the Mi Band 4 design with a pill shaped screen, only now it’s bigger. Where the new model packs a 1.2-inch Dynamic Color AMOLED screen which is 20 percent higher than its predecessor.

The bigger screen of course allows users to see more information. The screen has also been coated with 2.5D glass and has a peak brightness of 450 nits. Along with a bigger screen, Xiaomi also completes it with additional new watch faces animations.

Xiaomi Mi Band 5 also has more colors to choose from. Besides yellow, red, blue, and black that have been mentioned before, we also get ivory, purple, light green, and dark cyan colors.

Sleep tracking is not behind that now has an accuracy rate of 40% better than before and can now also show you related to your sleep, and give advice if you experience some sleep problems such as insomnia.

There is also a barometer, tracking the menstrual cycle, up to the PAI Score (Personal Activity Intelligence) that allows you to see how much impact your exercise and physical activity have done.

Speaking of sports, this time the Mi Band 5 is equipped with 11 professional sport modes which include rowing machines, elliptical machines, skipping ropes, yoga, swimming, walking, cycling, and others.

Another highlight that is not less interesting in the Xiaomi Mi Band 5 is the presence of magnetic charging support which means users no longer need to remove the strap when charging. Instead, this time just attach the charger to the charging pin that is placed behind.

The new Mi Band has a battery that is claimed to last for 14 days and like its predecessor, the device can survive in water up to a distance of 50 meters.

Mi Band 5 is also equipped with improved health features. The new wearable offers a heart rate monitor with a new PPG sensor which according to the company has an accuracy rate of up to 50% better.

This product beats all expectations. A very good time piece as well as health tracker. Battery life is incredible.