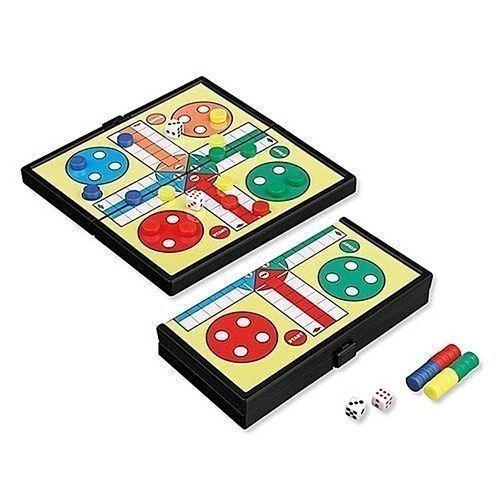 Normally delivered between Thursday 4 Jun and Tuesday 9 Jun. Please check exact dates in the Checkout page.
Ludo ( is a strategy board game for two to four[a] players, in which the players race their four tokens from start to finish according to the rolls of a single die. Like other cross and circle games, Ludo is derived from the Indian game Pachisi, but simpler. The game and its variations are popular in many countries and under various names.Ludo is a classic family game that has stood the test of time. Roll a six and race your 4 tokens from start to finish before anyone else can do the same!?Capture your opponent's pieces and send them straight back to the starting area. This classic game of skill and luck comes with everything needed to play including a board, 16 counters of 4 different colors and a die. A great game for 2 - 4 players aged three and upToday Games and intelligence go side by side.Ludo is an intelligently played mind game. It requires some basic knowledge for different moves that need to be taken on ones move. Game theory is the theory that bridges the gap between the complexity and simplicity of the game. It is a modeling tool that has certain set of rules to go ahead with the implementation of game.It helps both adulths and children to develop their brains .

Beautifully packaged; child friendly too. Worth every kobo