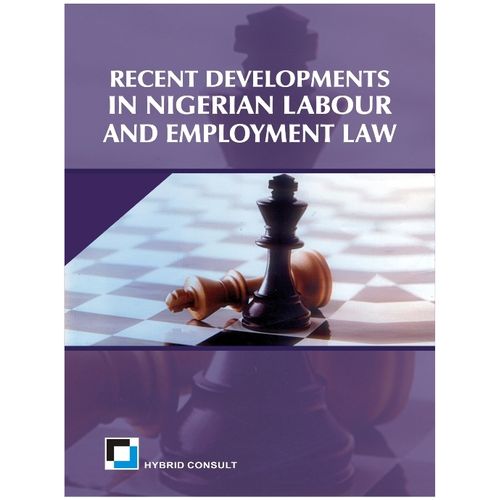 Part 1 and 2 deal with the changing face of the law as it relates to termination of employment without giving a reason. The law, from time immemorial, has been that an employer needs not give reason to terminate a contract of employment, he only needs to comply with the terms and conditions of the contract of employment. The trite common law has been that employers of labour are at liberty to terminate for good reason, bad reason or no reason at all, and the motive for the termination is also irrelevant. This trite common law rule is, however, fast changing as the National Industrial Court of Nigeria (NICN) is gradually moving away from this position. The law, as it stands today, is that employers must now give reason(s) for termination otherwise such terminations become wrongful and actionable. Consequently, the common practice of stating that “the services of the employee is no longer required” is no longer tenable in law.

The expression “unfair labour practice” has generally been defined to mean practices that do not conform with best practice in labour circles as may be enjoined by Local and international experience. See Mix & Bake V NUFBTE (2004) 1 NLLR (Pt. 2) 247, MPWUN V ALZICO Ltd (2010) 18 N.L.L.R (Pt. 49) 69, Aluminium Manufacturing Co. Nig Ltd V Volkswagen Nig Ltd (2010) 21 N.L.L.R (Pt. 60) 428.  Examples of unfair labour practices at workplace are legion and these include denial of employees the right to join trade unions, gender and racial discrimination, and discrimination on account of marital status, pregnancy and religious beliefs. Unfair labour practices are actionable wrong at the NICN and for which employees may be awarded damages in proven and deserving cases. For instance, in Akinfemiwa Akinyinka V More Time C02 Gas Plant Ltd, the National Industrial Court held that denial of annual leave to an employee is an unfair labour practice. Similarly, in Maiya V Incorporated Trustees of Clinton Health Access Initiative (2012) 27 NLLR (Pt. 72) 100, the NICN held that termination of employment of a female staff on account of pregnancy is an unfair labour practice.

Closely connected to this is the mandate of the court to apply international best practices in arriving at its decisions including and its powers to invoke and apply International Labour treaties to which Nigeria is a signatory. Of particular interest is the argument of the author that Section 254 (c) (2) of the 1999 Constitution has rendered impotent and inoperative, as far as International Labour treaties are concerned, the provisions of Section 12(1) of the 1999 Constitution which provides that a treaty provision may only be enforced in Nigeria upon being domesticated by an Act of the National Assembly. This argument seems to be correct as the NICN took the same view in Aero Contractors V NAAPE (2014) 42 NLLR (Pt. 13) 664. And if this interpretation is taken to be correct, then judicial authorities such as M.H.W.U.N  V Minister of Labour & Productivity (2005) 17 NWLR (Pt. 953) 120 will no longer be a good law as far as international labour treaties are concerned.

Part 4 attempts an overview of the operational framework of the NICN Alternative Dispute Resolution (ADR) Centre. The Centre offers disputing parties access to ADR mechanisms such as mediation and conciliation in the settlement of their disputes. The author noted that these ADR fora offer a quicker, efficient and equitable resolution of labour and employment disputes with little or no damage to relationships.

Part 6 and 7 examine the validity and enforceability of employment bonds and covenants in restraint of employment/trade in Nigeria. The author reviewed virtually all the decided Nigerian cases on these subjects.

Part 8 and 9 are quite an interesting reading. These Parts attempt a critical legal analysis of the practice of Workforce and Business Process Outsourcing including Job Offshoring in Nigeria. The world of work has seen tremendous changes in the last decade. The increasing wave of globalisation and trade liberalisation have led to the emergence and increasing dominance of non-standard work arrangements. Outsourcing is a global phenomenon and indeed one of the most discussed business issues of our time. The author answers the frequently asked question as to whether labour outsourcing is a lawful enterprise in Nigeria. The author also attempts an overview of the Federal Ministry of Labour Guidelines on Contract Staffing and Outsourcing in the Nigerian Oil and Gas Industry, Outsourcing and Representational Rights, Outsourcing and Corporate Risks, Business Process Outsourcing and Pioneer Companies Tax Reliefs, and Job Offshoring.

Part 10 deals with Expatriate Employment and the Implications of the Immigration Act, 2015 and Immigration Regulations 2017. This part provides a complete guide on how to obtain Business Permits, Residence Permits, Transit Permit, Temporary Work Permit (TWP), Visa on Arrival e.t.c.

Part 11 discusses some workplace issues thrown up by the social media explosion across the globe. Crucial issues discussed under this Part include whether pre-hiring checks of social media conducts by prospective employers is a legitimate enquiry or an unlawful intrusion, disciplinary actions on account of employee’s social media conduct and comments, summary dismissal on account of employee’s social media behaviour and comparative analysis of the law on social media use at workplace in other jurisdiction. Other topical and emerging issues in the Nigerian labour and employment law discussed in the work include sexual harassment at the workplace including the recent decisions of the NICN on same (Part 12), Post Termination and Resignation Discovery of Gross Misconduct Warranting  Dismissal (Pat 13), Forced Resignation and the Doctrine of Constructive Dismissal (Part 14) , Lagos State Regulation of Smoking Law and Implications for Workplace (Part 15), Legality of Pre-Employment HIV/AIDS Test in Nigeria (Part 16), Probation and the Principle of Deemed Confirmation of Employment (Part 17), Whistle-Blowing and Whistle-Blowers Protection at the Workplace (Part 18), Prolonged and Indefinite Suspension (Part 19), and the Trial on Record at the National Industrial Court (Part 20).

The book captures all the important developments in the Nigerian labour and employment law laced with recent judicial decisions on the subjects and yet presented in a simple language that makes the work comprehensible to both lawyers and laymen.