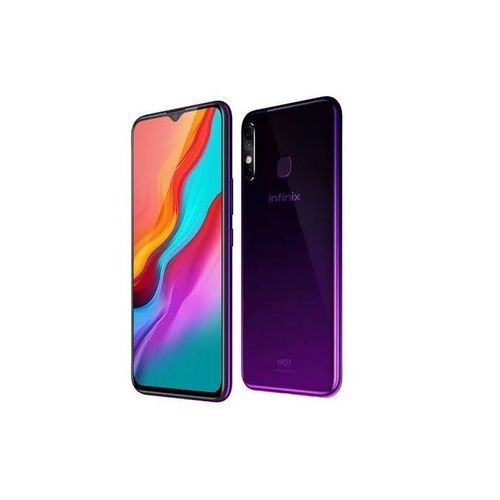 Infinix has grown a lot from the wide notch to the waterdrop-style notch that they have on the current Hot 8. The 6.6inch IPS screen might sound massive

In the same vein, this screen is impressive with almost 82% of space covered relative to the body of the smartphone on the front.

Enough of the front for now.

On the back of the Infinix Hot 8, we have a horizontal triple-camera arrangement that we have seen more times than we care to mention just this year alone. Infinix keeps the fingerprint scanner on the back, even though they could have moved it under the screen or hidden it on the side of the phone.

Worthy of note, though, is that the back of this phone is made of glass. We would never have expected such premium treatment on a phone of this level.

An 8 megapixels snapper on the front of the Infinix Hot 8 will handle selfie needs. We don’t suppose it would take the best selfies on the market, but it should be fairer than most.

On the back, though, we have some good challengers. The main 13 megapixels sensor is designed for wide image capturing, and that will be paired with a 2MP sensor for better depth capturing. There is a third sensor (QVGA camera) in there, but that would be for bettering captures in low ligh

Interestingly, the selfie camera comes with a LED flash of its own, so it will do well in some low light situations too. To better the prospects of the rear camera, we have a quad-LED camera setup in there.

Infinix decided to test two different chipsets for different configurations of the Hot 8. The 2GB RAM + 32GB ROM storage option of this affordable Android phone comes with a MediaTek MT6761 Helio A22 chipset while the option will use the MT6762 chipset instead.

Both of these chipsets are manufactured with the 12nm process, so they won’t differ much in their efficiency and operational capacity either. However, the first one is a quad-core chipset while the latter is an octa-core SoC instead.

The means the second model of the Infinix Hot 8 with octa-core built for consumers looking for more performance for gaming and multitasking.

No matter which unit you pick, you get Android 9 Pie operating system with the in-house XOS 5.0 running on top, paired with the PowerVR GE8320 GPU in the chipset.

Fortunately, Infinix didn’t think to remove the 3.5mm jack from their own unit – and they even worked in Dirac Surround Sound for the speakers.

Carrying a non-removable 5000mAh battery to match, users will get all the power they need with this device. But then, there is no promise of a fast charge technology in sight.